But square-cut or pear-shaped, These rocks don't lose their shape. Diamonds are a girl's best friend.

Click here to see Marilyn Monroe sing "Diamonds are a Girls Best Friend"
In an affidavit made on the 24th of July 1886, to Pretoria's Mine Department, South Africa, prospector George Harrison stated " I come from the newly discovered goldfields of Kliprivier, especially from a farm owned by a certain Gert Oosthuizen. I have a long experience as an Australian gold-digger, and I think it is a payable goldfield". This turned out to be a huge understatement and this area became the site of a huge gold rush and lead to the formation of the town of Johannesburg. It was initially laid out on the five farms in the area, the population in 1866 was 600, by 1892 it was 40,000, 1905 -  150,000 and now 3.2 million.
Claims were furiously staked, bought and sold till large companies emerged. The mines attracted thousands of immigrant "uitlanders" workers.  I read this story about one group of these miners that is said to have lead to the formation of the "Kimberley Diamond Mine. Fleetwood Rawstone and his group of fellow diggers, known as the "Red Cap Party" had staked their claim on the Northern Cape Farm of Vooruitzicht.

One day they were were annoyed when their servant and cook Esau Damoense know as Damon had too much to drink and as a punishment sent him to a nearby hillside and told him not to return till he found a diamond. (Perhaps inspired by the story of 15-year-old Erasmus Jacobs who in 1866 found the first diamond in South Africa on the banks of the Orange River, near Hopetown, a 21.25 carat diamond in the rough - later to be called "The Eureka") A sober Damon returned a few days later  with a few shiny stones, one of these being a 83.50 carat (16.7 g) diamond he found. The group rushed to stake their claim on the hillock ( they named Colesberg Kopje) and very quickly this area became a busy mining community. The site was named DeBeers New Rush after the brothers who owned the Vooruitzicht Farm. In 1873 the community was named Kimberley in honour of the British Colonial Secretary, Lord Kimberley.
The hillock soon disappeared, no wonder -  1,600 separate claimants all digging deep into the "blue ground" or kimberlite that surrounded the diamond bearing volcanic pipe. Conditions for the miners were dangerous and primitive. They lived in tents, corrugated iron huts, tarpaulins and no sanitary services, lack of fresh vegetables, landslides all taking their toll on the miners.

As the digging continued, Cecil Rhodes got a foothold in the Kimberley mine enlarging his holdings till finally in 1888 he  payed over 5 million pounds to take over the area and the De Beers Consolidated Mines Ltd was formed taking its name from the brothers who owned the farm.

Rhodes along with Alfred Beit, Frederick Philipson-Stow and Barney Barnato were given the position of life time governors. Sadly for Barney Barnato he drowned in mysterious circumstances in 1897 aged 44 and Cecil Rhodes died aged 48 of heart failure, Alfred Beit died aged 53 of a stroke, Frederick Philipson-Stow died aged 59.
In 1913 Earnest Oppenheimer became the mayor of Kimberley and in 1927 he managed to wrest control of the De Beers empire, building and consolidating the company's global monopoly over the world's diamond industry until his retirement. During this time, he was involved in a number of controversies, including price fixing, he died in Johannesburg in 1957.
The Kimberley Mine or Big Hole was closed in August 2014 at the outbreak of the First World War after 43 years of life and 14,504,375 carats of diamonds were mined.The most famous diamond found here is the The Tiffany Yellow Diamond - one of the largest yellow diamonds ever discovered; it weighed 287.42 carats (57.484 g) in the rough, 128.53 carats (25.706g) after cutting.The stone was purchased by New York jeweller Charles Tiffany. The cutting was carried out in Paris by a 23 year old George Kunz who studied the stone for a year before cutting it. He added  additional facets to the accepted square antique brilliant cut - bringing the total to 82. The diamond is known to have been worn by only two women - Mrs Sheldon Whitehouse at the 1957 Tiffany Ball held in Newport, Rhode Island, mounted for the occasion in a necklace of white diamonds. Then by Audrey Hepburn in 1961 publicity photographs for Breakfast at Tiffany's.
When not being exhibited around the world it returns to its permanent place of honour on the main floor of the Tiffany Fifth Avenue store, New York. 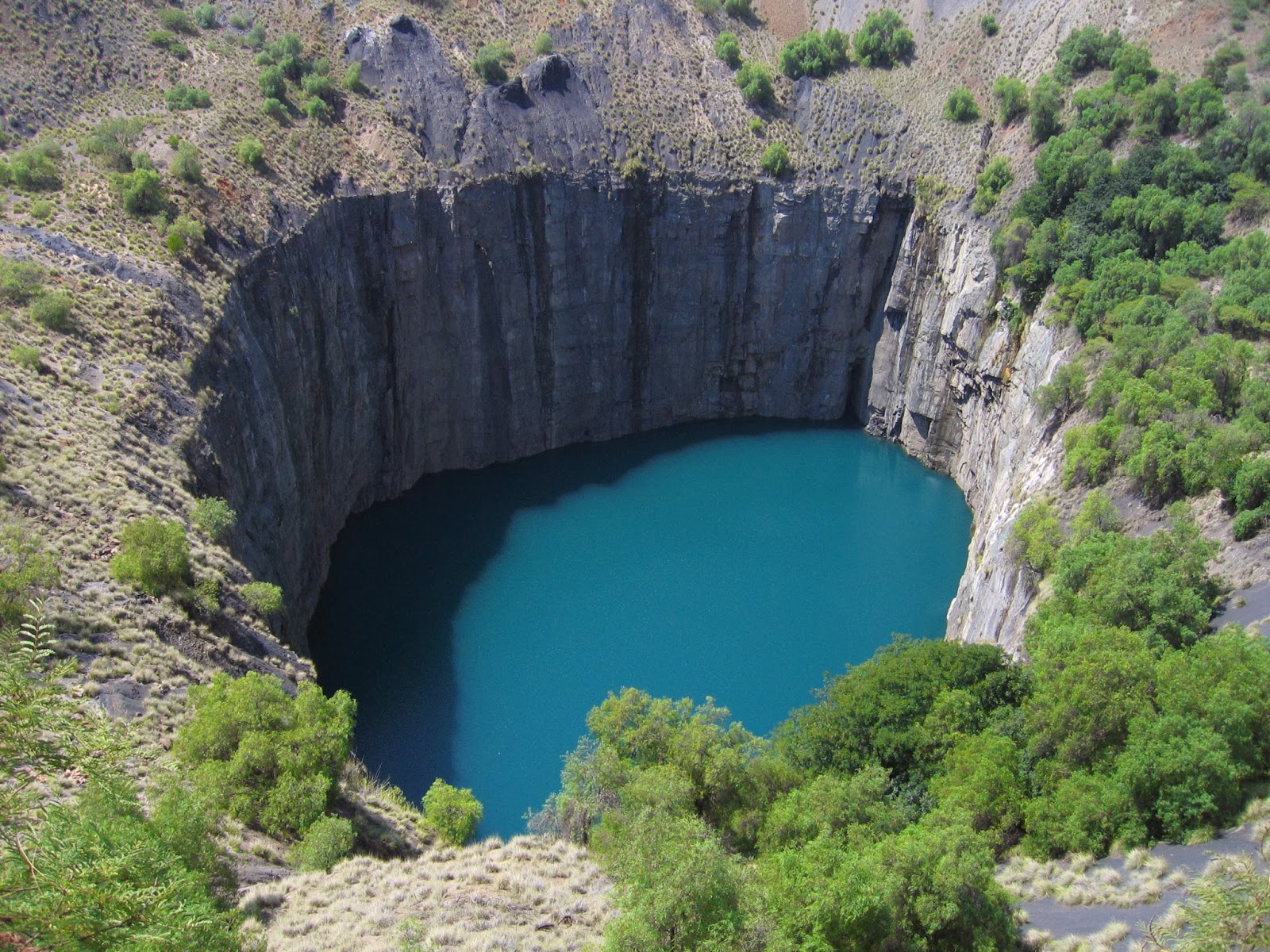 Today all that remains of the Kimberley Mine is a huge crater 214 metres deep with a surface area of 17 hectares and a perimeter of 1, 6 km.
Visit the Kimberely museum set up by De Beers in Johannesburg.