I don't wear a watch. I want my arms to weigh the same.

The words of Harry Hill. Anyone else out there not wear a watch? My husband has a bit of a collection, the most precious both in material and sentimental value is a watch left to him by his grandfather. Harvey Lewis was born in the 1890's, he grew up in the East End of London where he trained and qualified as a Ladies Master Taylor. Just before the WW1 he married and moved to North London.  During the war he was a bit of a wheeler dealer then after he established a flourishing tailoring business which he ran from his front room. The success of this lead to him rewarding himself with a Rolex Zebra Striped 9K Gold Prince Brancard wristwatch.
On October 1, 1927, the patent number 120849 was granted for a movement that was to be named Prince. The main advantage of the movement design was that, by placing the winding barrel and the balance at opposite ends of the watch, they could each be much larger. The Rolex Prince watch proved to be one of the most accurate wristwatches made. The accuracy comes from the very high quality balance wheel, which most unusually for a wristwatch used solid gold screws to add extra weight and therefore, momentum. The watch also had a very high quality finish to the whole escapement, even the wheels. All of these efforts went to ensuring the accuracy of the Prince. Rolex Prince with two dials is often referred to as a ‘doctors watch’ or ‘duo-dial’. The strap is a replacement however it still has the original gold plated pin buckle. The watch was given to Max, Harvey's only child, who hardly wore it and kept it in a safe for many years before passing it on to his younger son. Feel tempted to buy one? click here to make an offer.
Harvey also left some labelled coat hangers and wonderful wool fabrics that have since been made into suits. 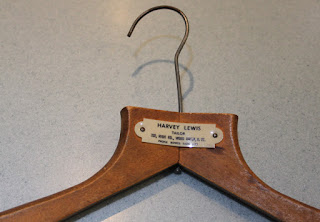 Watches have become a fashion accessory and for some a status symbol, others - just need to know the time. Which has made me wonder when man first had the need to tell the time, just going to google that question.......It seems that our forebears invented methods to divide the day or the night into different periods in order to regulate work and for ritual/religious festivals. The lengths of the time periods varied greatly from place to place and from one culture to another. An Egyptian sundial from about 1,500 BC is the earliest evidence of the division of the day into equal parts, but a sundial couldn't be used at night so other methods such as water clocks (clepsydra), oil lamps and candle clocks were developed. Click here to read about sundials in detail and make your own - all very mathematical.
In 27 AD Hipparchus of Niceae, working in Alexandria, proposed dividing the day into 24 equinoctial hours. Equinoctial hours, are based on the equal length of day and night at the equinox, split the day into equal periods. However, ordinary people didn't adopt this for well over a thousand years. (The conversion to equinoctial hours in Europe was made when mechanical, weight driven clocks were developed). The division of time was further refined by another Alexandrian based philosopher, Claudius Ptolemeus, who divided the equinoctial hour into 60 minutes, using by the scale of measurement of ancient Babylon.
The first clock escapement mechanism appears to have been invented in 1275 and subsequently watches evolved from these portable spring-driven clocks. More detail to follow in future blogs.
If you get a chance to visit the The science museum you can see a collection of early watches there.
Posted by Corinne Olivia at Friday, November 23, 2012 No comments:

I cannot promise you a world, Can't afford any fancy things, I cannot buy you diamond rings, No string of pearls

Russell Thompkins Jr of the Stylistics claiming his poverty prevents him giving his love any gifts. Sing along to the karaoke version here!

Really that's a poor excuse for being thoughtless. Jewellery doesn't have to have financial value to have great sentimental value attached to it. That's one of the real pleasures of giving and receiving jewellery.  Of all the pieces that I have been given, it is one of no value that shows great thought behind it; making its worth priceless to me.

As mentioned in my earlier blogs, my compulsion to pick up objects on the beach saw me, on the Andalusian coast earlier this year, picking up small fragments of household tiles. They had been worn smooth by the sea, one side was terracotta, the other glazed in white. I brought some home and there they languish with the inactive shell collection.
My 26th wedding anniversary arrived and my husband gave me one of these tiles. He had spotted a tile piece on the beach that had been formed into the shape of a heart and had hidden it in his pocket. Once home he had drilled it and threaded cord through and had the back engraved.
I enjoy wearing it, not for its value but for the associated memory and the thoughtfulness of the gesture.

The same with inherited jewellery, it doesn't have to be of large value to be enjoyed and to invoke memories of the relative to whom it belonged. A wonderful thing about jewellery is that it is enduring, it can be repaired, remounted even re-designed so that future generations can keep wearing whilst appreciating the history of a family piece.

Do you have any jewellery with a romantic story associated with it? Got any family pieces with an interesting history? share them with me here, I am curious to read  them.

Posted by Corinne Olivia at Friday, November 09, 2012 No comments:

Next to my own skin, her pearls. My mistress bids me wear them, warm them, until evening when I´ll brush her hair.

and one way to judge if pearls are natural, cultured or synthetic. (Read or listen to the full poem here)

Pearls were an important status symbol of this age and they held for the educated Dutch art lover, a number of associations. In no other painting by Vermeer are there so many pearls. The mistress wears a pair of oversized drop earrings (artificial), a pearl necklace and strings of pearls in her hair.

When you first put them on natural and cultured pearls feel cold on the skin, they do warm up as you wear them. I can't find an explanation of why they are so cold but suspect it's to do with the poor conduction of heat. Synthetic pearls don't feel cold, unless they are made of glass. So another test is to rub the pearls on your teeth; natural and cultured pearls feel rough, synthetic ones feel smooth.
If the pearls are unstrung rub two gently together; if they offer resistance they are real or cultured pearls. If they feel smooth they are synthetic.

In 1943, Maharaja Pratapsingh Gaekwar made headlines by marrying Sita Devi, his second wife. Referred to as “The Indian Wallis Simpson” by the Western media. Sita Devi received the jewels from the Baroda treasury including a seven strand natural pearl necklace.

The largest and most perfect pearls from the necklace were made into two large strands, consisting of sixty-eight graduated pearls, measuring approximately 9.47 to 16.04 mm, all matched in colour, lustre and shape and joined by a cushion-cut diamond Cartier clasp. In 2007 these were auctioned by Christies, along with matching brooch, earrings and ring, for the record sum of £4.5 million.
Read here in more detail.


La Peregrina is one of the most famous pearls in the world. Its history spans almost 500 years and it has passed from the African slave who found it at Pearl Islands in the Gulf of Panama to European Kings and Queens. Until recently, the pearl belonged to Elizabeth Taylor bought for her by Richard Burton as a Valentines gift - lucky girl!  She had it mounted on a diamond and ruby Cartier necklace. After her death it was auctioned at Christie's in New York, the bidding reached £7.1m. Watch the auction here.

Look after your pearls, they should be stored wrapped in soft cloth or in a soft-lined container to prevent them being damaged from harder items of jewellery.
Apply perfume, hair spray and other cosmetics before putting on your pearls to reduce the effects of these products on your pearls.
After wearing your pearls, wipe them with a soft damp cloth to remove any traces of cosmetic products or body oils.
The threads used to string the pearls are liable to stretch and break, be aware of this check the strands and get them restrung as necessary.

Posted by Corinne Olivia at Saturday, November 03, 2012 No comments: