There's a lot more to Garnets than you realise....

Garnet, the January birthstone, refers not to a single gemstone but to a mineral group made up of 15 different garnet species whose chemical and physical properties are closely related to one another. The differences in the chemical make up and structure creates garnets that are not just red but also green, colourless, pink, yellow, orange, purple, brown, black and the rarest colour is blue. Garnets have a high level of clarity, if you see blurring, clouding or lots of inclusions within a stone, its unlikely to be a garnet.

Garnet is a very common rock forming,hard mineral with the power to resist weathering and decay. It is found all over the world, the major mining sites include the Czech Republic, Greece, India, Madagascar, Russia, Sri Lanka, Tanzania and The United States.

There are six main garnet types that are used for gemstones:

Almandine: Is the most common and most widely used garnet type in jewellery making. Some almandine garnets contain inclusions that when polished correctly as cabochons display a 4-rayed star asterism, these are known as "Star Garnets". Almandine garnets are used mostly in industry (see below)
COLOUR: dark red, reddish brown, black.
HARDNESS: 7.5-8.5 mohs scale


Andradite: is a fairly common variety and can produce fine garnet gemstones. A desirable gem form of Andradite is the rare and expensive Demantoid, which is a transparent green variety.

Grossular: Is the most varicoloured form of garnet. It varies from dark to colourless. Grossular gem varieties include the green Tsavorite and the orange to orange-brown Hessonite.

Pyrope: is the most well known form of Garnet, less abundant but most commonly used in jewellery making. Pyrope is always red and gets its name from the Greek for fire and eye.
COLOUR: RED.
HARDNESS: 7-7.5 mohs scale

Uvarovite: Is a rarer member of the garnet group. It is deep green in colour due to chromium in its composition. Other forms of green garnet are due to chromium impurities and can sometimes be mistakenly labeled as Uvarovite.

Colour changing Garnets Pyrope–spessartine (blue garnet or colour-change garnet)
It was thought that garnets came in every colour but blue until blue garnets were discovered in the Bekily district in southern Madagascar in 1998. These garnets are bluish-green to greenish-blue in daylight with a strong change to intense purple or purplish-red under incandescent light. The change is due to relatively high concentrations of the element vanadium and low concentrations of the element chromium. The mine also has a variety of garnets that are greenish-yellow to yellowish-green in daylight and an intense pink to red under incandescent light.


Colour changing garnets have also been found in Tanzania, Kenya and Sri Lanka but not of the larger size and intense blue of the garnets of Madagascar.

Follow the trail of Garnets to find Diamonds
Most of the garnets found at the Earth's surface have formed within the crust but others are brought up from the mantle during volcanic eruptions. These deposits called xenoliths also contain diamonds, although for every diamond there are considerably more garnets. As the xenoliths weather, the garnets are washed downslope in soils and streams. These garnets serve as "indicator minerals" for geologists looking for diamond deposits they can follow the garnet trail to the source deposit and hopefully diamonds!

One of the Oldest Gemstones
The Earth is 4.6 billion years old and remnants of its early crust are extremely rare. In 2008 scientists from McGill University did tests on Bedrock along the northeast coast of Hudson Bay, Canada. They determined that the rock samples there were the oldest rock on Earth, ranging from 3.8 to 4.28 billion years old. The rock there is composed of the mineral amphibole and it contains abundant amounts of garnet.
This can be seen in the image below as as large round "spots" in the rock, the oldest Garnet on Earth.

No wonder then that ancient civilisations around the world were able to find and use garnets
to adorn themselves. Artefacts set with garnets have been discovered in ancient burial sites across the world. Carved garnets were used as seals to stamp the wax that secured important documents. Garnets were used in the creation of protective amulets -  in Ancient Rome, garnet was worn by pregnant women as protection against death from post-partum haemorrhage.
In Ancient Egypt amulets were worn to protect the body, bestow healing powers and bring good fortune. Some were worn in daily life but others were placed inside mummy wrappings to safeguard the individual on their journey and existence in the afterlife.
The use of materials relating to colour was very important. Garnet symbolised the extremes of anger, fire, victory and life. See below some examples of these ancient pieces, still in incredibly good condition.

Double finger ring in gold set with 2 sardonyxes and a centre garnet.
Roman 4th century AD
On display at the British Museum.

A cross belonging to one of the first Christians of Northern England.

This gold and garnet cross was found in Burton Pidsea, East Yorkshire in the 1960's. It dates to the seventh century when Christianity was first being introduced to the Anglo Saxons in England. Examination showed that the garnets were set in a bedding of calcium carbonate, a technique common for Anglo-Saxon pagan jewellery of that time. Originally there would have been ninety-five set in the cross, only 58 survived - not bad considering the passage of time! 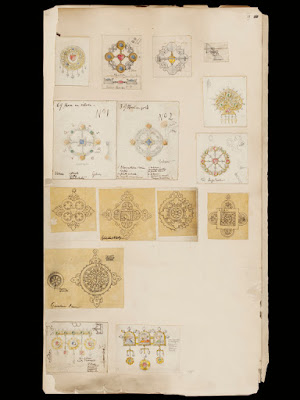 These sketches were comprised of 15 drawings of brooches in pencil, pen and watercolour. He had searched for 20 years for one of these brooches and had given up hope of ever finding one. Jill realised that sitting upstairs in her jewellery box was an old broken brooch given to her by her mother, who had in turn inherited it from her old primary school teacher. The brooch matched exactly one of the designs. The brooch was made from silver and engraved with the initials "J.P.M.S." has four turquoise forget-me-knots with a central red cabochon garnet heart. 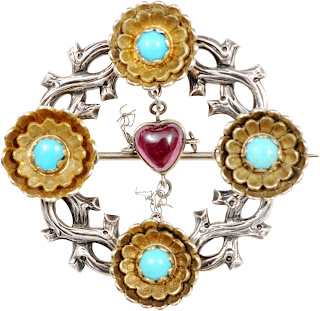 A few days after, she took the brooch into Gildings Auctioneers for their advice, they in turn contacted the Antiques Roadshow.
Mr Gilding, Mrs Cousins and the brooch were invited to a recording of the Antiques Roadshow where they surprised Mr Munn who went on to confirm its authenticity and valued the brooch for £10,000. The brooch was to go on to sell for £31,000.00 at auction in August 2011. The designs were by William Burges one of the greatest Victorian architects and designers.
Close study of the brooch revealed it to be engraved with the name "Seddon" and with further research, Mr Munn was able to reveal that Burges had made the brooch for his friend John Pollard, an architect who moved in the circle of the Pre-Raphaelites on the occasion of his marriage to Margaret Seddon in 1864. The discovery of a second brooch adds weight to the theory that these were made as gifts for bridesmaids or other members of the wedding party.
The brooch was sold to the Victoria and Albert Museum where it can now be viewed along with the original sketches.

The Subway Garnet
In New York, August 1885, during a sewer excavation on 35th Street, between 7th Avenue and Broadway,  a reddish-brown almandine garnet was uncovered 8ft underground. It had 24 natural facets, measured seven inches in diameter and weighed 9 pounds and 10 ounces and was estimated to be 430 million years old. Manhattan's bedrock is streaked with veins of coarse-grained granite bearing amethysts, opals, tourmalines, beryls, chrysoberyls and garnets although few of gem quality. A geologist for the American Museum of Natural History, Joseph J. Peters, stated it was one of the largest ever found in the USA. Several months later the garnet, which had been used as doorstop in a shop, was given to George F. Kunz, a geologist and member of the Mineralogical Club and was known as the Kunz Garnet.
In 1968, the garnet was later given to its current owner, the American Museum of Natural History, where it was displayed at the entrance to Mineral Hall. However, with over 100,000 specimens in the museum's mineral and gem collections only 2% of specimens can be displayed at any one time. At this moment the Subway Garnet is no longer on public display but you can make an appointment to view it.

Bohemian Garnets (also known as Prague or Czech garnets)
These small fiery-red to ruby-red pyrope garnets have been mined for over 600 years in the
area once known as Bohemia. The Jewellery made here used the small garnets packed closely together to cover the piece and show very little metal setting.

Anyone visiting Prague will find its streets full of jewellers selling garnet jewellery. Modern methods have seen the introduction of mass-produced machine pressed metal settings for the garnets. Not of the same quality of earlier years.

Other uses of Garnets
The majority of almandine garnets today are used as abrasives. The garnet is crushed, then graded by size and then made into sandpaper, sanding belts, discs and strips. Garnet particles are used to polish wood and optical glass.

Garnet particles are mixed with water and fired in a high-speed jet in a process known as water jet cutting. Water jet cutting slices through metal and even granite with precision and with less dust and noise than other cutting methods. See a video here of the process.

Garnet is an ideal water filter media as it is a chemically inert and a non-metallic mineral.

Garnet is also used in the manufacture of computer chips.

Posted by Corinne Olivia at Tuesday, January 23, 2018 No comments: