An Emerald Is As Green As Grass

An emerald is as green as grass;
A ruby red as blood;
A sapphire shines as blue as heaven;
A flint lies in the mud.
A diamond is a brilliant stone,
To catch the world's desire;
An opal holds a fiery spark;
But a flint holds fire.

Just wandering away from time pieces for a while. Have you ever been to the Natural History Museum, Exhibition Road, South Kensington? Go to the Vault to see "some of nature's most rare, unique and valuable treasures"Like the Medusa Emerald - on loan there till July 2013.

A team of experts used state-of-the-art techniques to uncover the emerald discovered in a large boulder of quartz in a mine in Zambia. Several months of delicate work, painstakingly removing the quartz, finally revealed the beautiful emerald crystals. Emeralds are my favourite precious gemstone, more so than diamonds. So why and how do crystal form and what makes some more expensive than others?
First some basic chemistry, Crystals are build out of atoms (an atom is the basic unit of an element, it is a form of matter which may not be further broken down using any chemical means). When two or more atoms combine a molecule is formed. Molecules combine to make elements and when these elements combine Minerals are produced, mostly compounds (more than one element) though some Minerals are made from one element only e.g. Native copper. There are over 4,000 minerals each with a fixed chemical composition. A mineral is defined as being -
1. Naturally occurring.
2. Inorganic.
3. Solid.
4. Having a definite chemical composition.
5. Having an ordered internal structure.
Minerals can have a Crystalline Form - this occurs when a mineral’s atoms or molecules join in a systematic repeating pattern defined by its chemistry and structural arrangement of its atoms. The crystalline form of a mineral determines its cleavage (the way the crystal breaks) and many other properties. Depending on the type, crystalline forms are grouped into 32 geometric classes of symmetry—crystals that are symmetrical with relation to planes, axes, and centres of symmetry. From there, crystals are further subdivided into 7 Crystal Systems on the basis of the relationship of their axes (imaginary straight lines passing through a crystal’s centre). These are 1.Cubic - e.g. diamonds, garnets. 2. Hexagonal - e.g. ruby, sapphire, emeralds. 3. Orthorhombic - e.g. topaz, peridot, tanzanite. 4. Tetragonal -  e.g. zircon. 5. Monoclinic - e.g.kunzite 6. Triclinic - e.g. feldspar, turquoise 7. Trigonal - e.g. quartz.
Crystal Habit - refers to the general shapes of crystals governed by the development of their faces. It depends not only on atomic structure and crystal symmetry, but also on on the environment in which the crystals grew. Mineral crystals may exhibit different crystal habits with differing environments. Conditions for unimpeded crystal growth of beautiful, well-formed mineral crystals are rare. Quartz for example - provided the growth is undisturbed - always grows as 6 sided columns.
Crystals can be described by how well it is formed, ranging from euhedral (perfect to near-perfect), to subhedral (moderately formed), and anhedral (poorly formed to no discernable habit seen). Gold is a soft mineral and is commonly found as anhedral
crystal masses, specimens with euhedral crystals are less common.
The best way to understand how crystals grow is to make some Rock Candy, click the link for an easy method.

There are  5 requirements for Crystallisation.
1. Ingredients - in this case sugar dissolved into heated water so the water becomes super saturated.
2. Temperature - as the suspension cool cools the amount of solid ingredients it can hold in suspension drops and sugar crystals form.
3. Pressure - pressure has no affect on rock candy, but it takes the proper combination of pressure and temperature for more complex minerals to crystallize.
4. Time - it takes the right combination of ingredients, heat and pressure and these must last long enough for the minerals to crystallise.
5. Space -  The crystals must have room to grow. 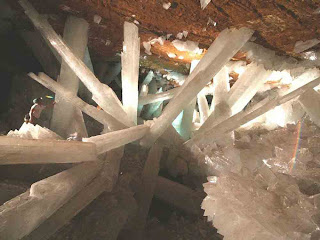 The Naica Mine of Chihuahua, Mexico, is a working mine that is known for its extraordinary crystals. Naica is a lead, zinc and silver mine in which large voids have been found, containing crystals of selenite (gypsum) as large as 4 feet in diameter and 50 feet long.
Inside the earth, the ingredients are more complex than this sugar solution. You can have different minerals crystallising from the same solution at different temperatures. Corundum might crystallise first then as the solution continues to cool, topaz might form and later quartz.
Emerald is composed of the mineral beryllium aluminum silicate - Be3Al2SiO6 with traces of the minerals chromium and sometimes also vanadium which give it Emerald its green colour. Click here to read here in detail about the formation of Emeralds. The natural Emeralds that are being mined today are actually relics of geologic events that took place hundreds of millions of years ago, deep in the Earth’s crust.
The most common crystal is ice, if water freezes naturally it is classed as a mineral and ice is the crystalline form of solid water.
Next time, values, rarity, other uses of gems, laboratory grown gems and more....