"A cloud, from which mountain was uncertain, at this distance (but it was found afterwards to come from Mount Vesuvius), was ascending,

the appearance of which I cannot give you a more exact description of than by likening it to that of a pine tree, for it shot up to a great height in the form of a very tall trunk, which spread itself out at the top into a sort of branches; occasioned, I imagine, either by a sudden gust of air that impelled it, the force of which decreased as it advanced upwards, or the cloud itself being pressed back again by its own weight, expanded in the manner I have mentioned; it appeared sometimes bright and sometimes dark and spotted, according as it was either more or less impregnated with earth and cinders."
Pliny the Younger recounting the eruption of Vesuvius in 79AD.

The Roman Empire was vast and full of resources such as gold, silver, electrum - a naturally occurring alloy of silver and gold, precious gemstones such as emeralds, pearls, diamonds and sapphires. Romans liked to show off their wealth and status by embellishing  their homes with beautifully made objects and adorn themselves with jewellery.  Although for a time only higher-ranking men were allowed to wear gold signet/seal rings, the lower classes wore cheaper brass or iron rings. Wealthy roman women wore the types of jewellery still worn today, rings, earrings, bangles, chains etc. Brooches were used to fasten clothes, boys wore amulets called "bulla" to ward off evil. The less well off were happy to wear jewellery made from glass or even bone. Early Roman jewellery was inspired by the Greek and Etruscan (Etruscan is the modern name given to a civilization of ancient Italy) art, later Egyptian influenced styles became popular.
Click here to see a wonderful selection of Roman artefacts including jewellery and coins, discovered at Pompeii and Herculaneum.

Roman Coins - you can read in detail here about Roman coins - coins were produced throughout the Roman Empire see a list here of the Roman Mints.

Coins were created by striking with a hammer a blank metal disk, called a flan, which was placed on an engraved bronze punch. All coins were struck by hand, thats why many Roman coins were often struck off-centre so that part of the design was lost off the edge of the coin and the coin did not have a uniform thickness. Collectors of Roman coins place a higher value on a well struck coin. Read how coins were made in more detail here.

Titus Flavius Vespasianus  was Emperor when Vesuvius erupted. He was born in AD 41 and grew up at the court. Records state he was a popular, handsome and talented youth, intelligent and skilled at warfare. Titus’ reign not only saw the eruption of Vesuvius in AD79 but in AD80 the another fire in Rome and an outbreak of plague. He spent his personal wealth to aid those affected by the disasters. He died young as was mourned as an emperor with the best interests of his people at heart. Coins of him were issued from 79 until 81.  A denarius found in Pompeii proclaimed the latest collected titles of the victorious Emperor Titus, acclaimed emperor for the fifteenth time, Titus did not receive his 15th Imperial acclamatio until September AD79, so helping date the eruption of Vesuvius to after this time.
Coins were often incorporated into rings, pendants and on bangles.


Following the eruption of Vesuvius many people fled however, it is believed that some  thought it was safe return to collect their money and belongings. Several bodies were found clinging to valued possessions or objects that might bring them good luck. What they didn't know was the worst was yet to come, the danger wasn't from the ash causing suffocation.
What caused the death of so many so quickly was a process called Pyroclastic Current  - this is a cloud of hot gases and rock that rapidly flows from some volcanos when they erupt, as fast as 300km an hour hugging the ground as they flow down the slopes.  In Herculaneum only 7km away temperatures of the flow reached 500 ºC, death was instantaneous, flesh was vaporised from the body - all that remained were the blackened skeletons.
The citizens of Pompeii,  further away weren't so lucky they had a more prolonged death. Forensic investigation of the positions of some bodies showed them to be in the "Pugilistic Attitude - that is arms positioned as if they were boxing this is because extensive heat leads to coagulation of muscle proteins and shortening of muscle fibres resulting in flexion of big joints. It is consistent of extreme/intense heat at the moment of death. Experiments have shown the  temperatures here  were between 200 to 250ºC . The flesh was cooked, clothing remained intact. The bodies were coated in volcanic ash which hardened which cooled and preserving the shape of the bodies. In modern times these were used as casts and filled with plaster  to preserve them.
Click Here to see the British Museums TIme Line of the Eruption of Mount Vesuvius in 79AD.
WIth some of these victims were also precious possessions that were grabbed in the panic to escape including jewellery, coins and gems. As intense as the heat was it still wasn't hot enough to melt the metals as Gold melts at 1064ºC, Silver at melts at 962ºC.
Most of the jewellery and coins were found next  to the body at the hip - where they would have been kept in purses tied to the hip. 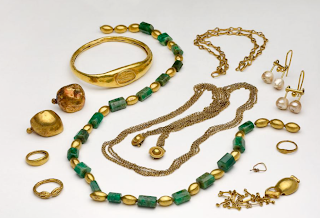 A woman was found with bags of jewellery and gold and silver coins - more wealth than found with any other body. The only piece of jewellery she was wearing was the large necklace or "body chain".

Thank you to the British Museum for some of the images,  there now is an exhibition about  gold in ancient Columbia - called Beyond El Dorado

Coincidently we were asked to produce a replica of a Roman coin in gold and set it into a pendant. The easiest method for us to use was the loss wax process, whereby we carved the desired image in wax and used this to make a cast into which melted gold was poured. After this cooled it was removed from the mould and hand finished to give the desired effect.

Posted by Corinne Olivia at Monday, November 04, 2013 No comments: