He clasps the crag with crooked hands; Close to the sun in lonely lands, Ring’d with the azure world, he stands.

Excerpt from The Eagle- Alfred Lord Tennyson
Published: 1851
Lapis Lazuli- (also known as lazurite and ultramarine pigment)
Have you ever visited the British Museum? There are hundreds of exhibits featuring ancient items of jewellery, many of which use Lapis Lazuli, a distinctive deep blue stone, in their design. In ancient times Lapis Lazuli was highly desirable, difficult to obtain and a symbol of wealth and prosperity, so only the most privileged could afford it. These days lapis lazuli is still a popular, relatively inexpensive, semiprecious gemstone used in modern jewellery.  Many of the ancient designs wouldn't look out of place in todays world.
The finest Lapis Lazuli is an intense blue and the word ‘azure’ that describes the deep blue colour of this stone has found its way into many languages. In Poetry, azure is often used to represent or refer to the sky or Heaven.

The name originates from the latin for stone “lapis” and the Persian "Lazhward", which was an area, known for its deposits of lapis lazuli (“stone of Lazhward”) Lajward.

Lapis Lazuli is a metamorphic rock composed of sodium, calcium, aluminium, silicon, sulphur, oxygen (Empirical Formula: Na3CaAl3Si3O12S). It is formed when limestone or marble, deep in the earth, has been subjected to extreme heat and pressure sufficient to change the chemistry of their constituent minerals. The result is the formation of the blue silicate lazurite, the distinctive blue component of Lapis Lazuli. Lapis often contains visible white calcite and golden grains of pyrite that mimic gold.

Lapis Lazuli was treasured by ancient civilizations and used for ornamental carvings, mosaics, wall coverings and it was fashioned into beads or cabochons and polished to use as a gemstone. In ancient Egypt it was used to carve scarabs, protective stones or amulets in beetle form that protected graves, houses or were given as a gift.

The Royal Cemetery of Ur is an archaeological site in southern Iraq (ancient Mesopotamia) which was excavated between 1922 and 1934 by Leonard Woolley in association with the British Museum and the University of Pennsylvania. The site contained a wealth of treasures amongst more than 2000 burials which took place between 2600 BC-2300BC. Especially significant was the Tomb of Queen Puabi, which was discovered relatively untouched, her body was covered in jewellery made out of beads of gold, silver, lapis lazuli, carnelian and agate. Many of these items are on display at the British Museum.
Early references to the mining of lapis lazuli were in Persia, Tibet and China. Today it is still mined in varying qualities in the former Soviet Union, Asia, South and North America and Africa. However, the finest quality stone comes from the mines in Afghanistan in the remotest area of north-eastern Afghanistan. In the mountains of Badakhshan, is the mine Sar-i Sang (a name meaning "place of stone"). It is estimated to be 7,000 years of age and believed to be the oldest continuously-operating mine in the world. Throughout recorded history, people have come here seeking lapis lazuli, which exists here in the purest form and in the greatest quantity known on Earth.

Take a look here at a short video about the mining of Lapis, a highly risky occupation with little reward for the miners.

Ultramarine
In the past Lapis was ground and processed to make the pigment ultramarine for tempera paint and oil paint. The name “Ultramarine” is derived from the Latin “ultramarines”, meaning "beyond the sea" as it was originally imported from Asia by sea.

The earliest use of lapis lazuli as a pigment were found on the cave paintings of the Temples of Bamiyan in Afghanistan, dated to be from the 5th and 9th centuries A.D. 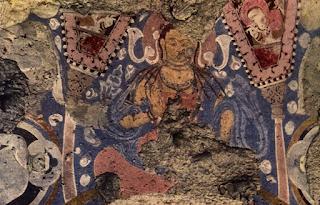 To produce the pigment from lapis lazuli, the blue lazurite has to be separated from the other minerals present. Lapis Lazuli was ground and mixed with molten wax, resins and oils, wrapped in a cloth and kneaded with a caustic solution called lye to isolate the blue particles from the rest of the mixture. It was an expensive colour to purchase because of the very high quality of stone required and because of the drawn out complicated method of extraction. The use of Ultramarine with gold in medieval times was popular for use in sacred paintings and manuscript illuminations.

Click here to see how ultramarine was made from Lapis Lazuli

European artists used the pigment in moderation, reserving the ultramarine blues for the robes of Mary and the Christ child. As a result of the high price, artists sometimes economised by using a cheaper blues, such as azurite, for under painting.

In 1806 the chemical composition of ultramarine was identified and in 1828 a process to manufacture a synthetic ultramarine which could be made economically was discovered. The first artist accredited with its use was J.M.W. Turner in 1834 and from then on nearly all of the pigment used in painting was of the synthetic variety.

The colour of Lapis Lazuli is natural and it is generally not treated, though occasionally lighter coloured stones may be dyed a deeper blue.

Similar Minerals
Azurite-  is a common mineral found in many locations worldwide. Areas that produce excellent crystals include in France, Italy, Russia, Morocco, Namibia, the United States, Mexico, Australia, and China. Azurite is a much softer mineral but can be used for jewellery such as beads and cabochon, however, heating destroys azurite that limits its uses. Azurite was also used as a blue pigment since antiquity and was a major source of the blues used by medieval painters. Whilst true lapis lazuli was chiefly supplied from Afghanistan, azurite was a common mineral in Europe at the time.


What to look for when choosing Lapis Lazuli Items

Mined Lapis Lazuli rough pieces can be very large and the larger sized pieces are often carved into objects of art. A good lapidarist can shape and size smaller pieces for use in designer jewellery.
The most valued colour in a lapis lazuli is the azure blue of mid to dark tones with no visible specks or streaks of white calcite and little or no pyrite, although many prefer lapis with an even sprinkling of golden pyrite flecks.

Avoid lapis that looks dull and green, this is the result of an excess of pyrite. Lapis with white calcite streaks is less attractive and therefore of less valuable.

Looking after your Lapis Lazuli Jewellery.